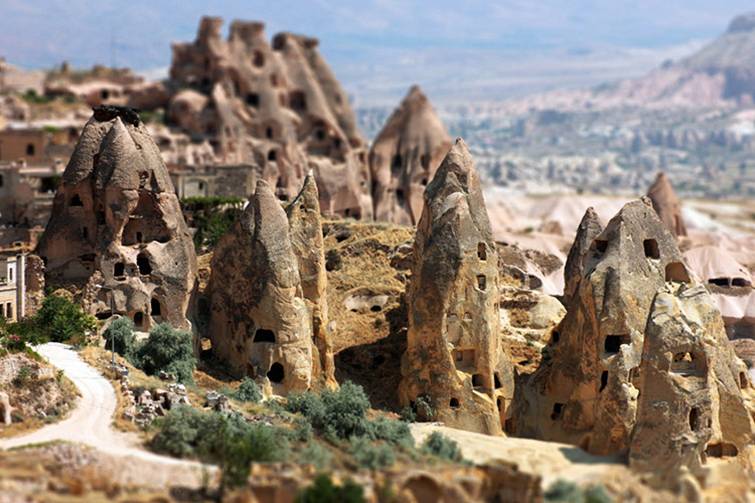 Cappadocia region was formed 60 million years ago by erosion of soft layers of lava and ash from Mount Erciyes (Argeus), Mount Hasan and Mount Güllü composing with wind and rain over millions of years.

Human settlement at the Cappadocia region dates back to the Paleolithic era. The lands where the Hittites once lived have been one of the most important centers of Christianity in the later periods. Houses and churches carved into the caves and rocks turned the region into huge heaven for Christians escaping from the dominance of the Roman Empire.

Cappadocia is a region spreading an area covering the provinces, particularly to Nevsehir, Kirsehir, Nigde, Aksaray, and Kayseri.

The region of Cappadocia is a place where nature and history integrates. While geographical events created fairy chimneys – the people carved houses and churches inside these chimneys. Later on decorated them with frescoes in this historical process, bringing the traces of civilizations for thousands of years to present. The written history of Cappadocia, where human settlement dates back to the Paleolithic era, begins with the Hittites. Hosting trade colonies throughout history and founding commercial and social bridges between countries, Cappadocia was one of the important junctions of the Silk Road.

In the 12th century BC, a dark period began in the region with the collapse of the Hittite Empire. During this period, the late Hittite Kings with effects of Assyria and Phrygia ruled the region. These Kingdoms lasted until the Persian invasion in the 6th century BC. The word used today, Cappadocia, means "Land of Beautiful Horses" in Persian. In 332 BC, Alexander the Great defeated the Persians and encountered great resistance in Cappadocia. During this period, the Kingdom of Cappadocia was established. The Roman power began to be felt in the region towards the end of the 3rd century BC. In the middle of the 1st century, Kings of Cappadocia were appointed and toppled from the throne by the Roman Generals. When the last king of Cappadocia died in 17 AD, the region became a province of Rome.

In the 3rd century, Christians came to the Cappadocia which became a center for education. Pressure on the Christians increased between 303-308. But Cappadocia was an ideal place to be safeguarded from pressures and to spread the Christian doctrine. Deep valleys and shelters dug into the soft volcanic rocks created safe heaven against the Roman soldiers.

The 4th century is the period of the people known as "Fathers of Cappadocia." But the importance of the region reached its climax when Leon III, Emperor of Rome banned icons. Under these circumstances, some people who were pro-icon started to take shelter in the region. Iconoclasm movement lasted more than a hundred years (726-843). Although some Cappadocian churches were under the influence of Iconoclasm in this period, pro-icon people easily continued worshipping here. The monasteries of Cappadocia developed considerably during this period.

Again, in these periods, Arab raids started to affect the Christian regions in Anatolia, from Armenia to Cappadocia. People escaping the invasion and coming to the region changed the styles of churches in the area. In the 11th and 12th centuries, Cappadocia passed into the hands of the Seljuk Turks. The region spent a period without trouble subsequent times under the Ottoman Empire. The last Christians in the region migrated from Cappadocia due to the exchange of the Treaty of Lausanne in 1924-26, leaving beautiful architectural examples behind.

Traditional Cappadocian houses and dovecotes carved into caves reflect the uniqueness of the region. These houses have been constructed on hillsides by using rocks mainly in the 19th century. The Cappadocian Rock, is the only construction material of the region, as it is very soft after quarry due to the structure of the region, it can be easily processed but after contact with the air, it hardens and turns into a very strong construction material. As a result of this easy and unique process, regional stonework is developed and turned into an architectural tradition. Upper parts of the doors built with arches are decorated with stylized ivy or rosette motifs. Dovecotes within the region are small structures constructed in the 18th century and in the later of the 19th century. Some of the dovecotes, which are important for showing Islamic picture art, had been constructed as monastery or church. Regional artists decorated the surfaces of dovecotes with rich inscriptions and adornments. The region is also famous for winemaking and grape growing.